Attending the HKonJ People’s Assembly and Moral March is a Community UCC tradition and this year we are going online!

Organizers have planned a week of activities, culminating in the assembly on Saturday morning, 10-noon. 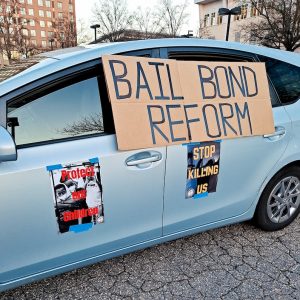 Adrienne Little’s car at the kick off Motorcade last Saturday

How to participate virtually

CUCC’s Do Justice Ministry invites you to attend as many events as possible, especially this Saturday for the People’s Assembly.

Saturday February 13th  10AM–NOON People’s Assembly Join Facebook Live  HERE (You do not have to be a member of Facebook.) 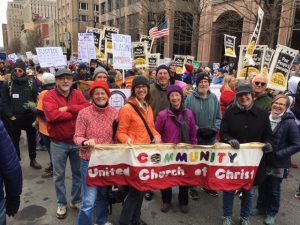 The letters stand for Historic Thousands on Jones Street (the location of the NC General Assembly).  This annual event brings together a coalition of groups working in many justice areas in their communities to work together toward a 14-point People’s Agenda for NC.  We know that different kinds of injustice interact and the solutions need to, too.  Health care, a living wage, environmental justice, civil rights (no matter your skin color or gender identity), the justice system – it’s all a tangled ball of yarn that the HkonJ People’s Assembly Coalition looks at together through a moral lens informed by people of many faiths and no faith.

More about the Virtual Mass Moral March on Raleigh

The Mass Moral March is the gathering of the coalition partners of the Historic Thousands on Jones Street (HKonJ) People’s Assembly Coalition. We hear testimony from the people directly impacted by injustice about the changes that would improve their lives. We support one another across our areas of justice interest. Environmentalists stand up for those seeking a living wage; those needing health insurance stand up for their LGBTQ sisters and brothers. We know we are stronger together and that injustice anywhere makes our area of work that much harder. Community UCC is a coalition partner of HKonJ.

Read the 14 Points People’s Agenda, look at the list of coalition partners, read the history and accomplishments of HKonJ here (these sections near the bottom of the page)