A congregation which is over 100 years old has many stories to tell, and deep roots to nourish it.

Below are a few stories and milestones which might help you get to know us, but you might also enjoy browsing archives created by one of our members, Lavon Page.  The CUCC Archive is his personal take on our history and, having joined in 1971, he was eyewitness to many of the events and knew people involved in earlier parts of our history.  For an historical overview, you might want to start with his four-part video, A Narrative of the Church. 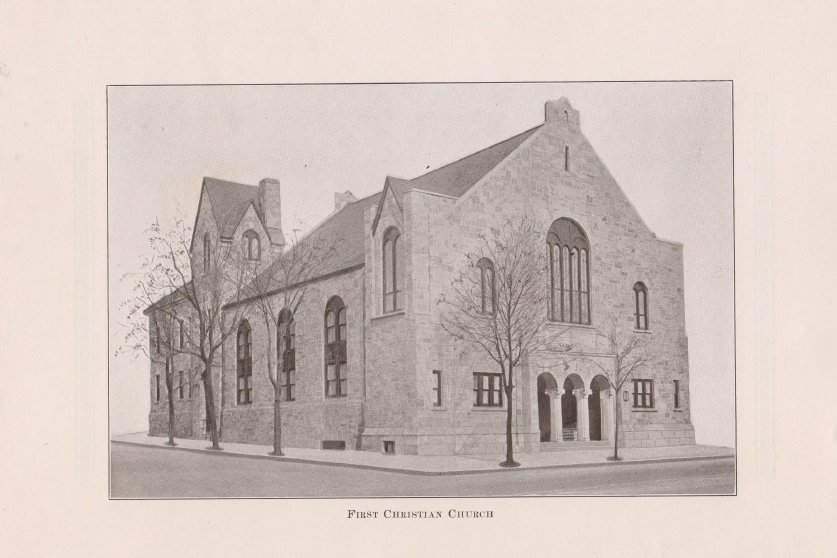 Community United Church of Christ was founded in 1881 as the First Christian Church of Raleigh. The congregation was one of a handful of new churches in the O’Kelly Chapel Christian movement, which was based in the Triangle region of North Carolina.  The members of First Christian were largely rural folks who had moved to the capitol city. They were pietistic, conservative and conventional, First Christian’s founder, Rev. W. G. Clements, was a Confederate soldier in the Civil War and later Superintendent of Public Instruction for Wake County Schools. He was committed to promoting educational opportunities for black children of the freed enslaved people.  In the complexity of his life are the seeds of two themes in our history: the call to work for racial justice, and a love of learning.

In 1924, the structure of the church building was deemed unsafe, and the congregation raised funds to build a grand stone church at the corner of Hillsborough and Dawson Streets.  That central location was not too far from the state college, or from the parts of town where black communities were established.  This would prove important to the ministries of the congregation.

Becoming a “college church” with a commitment to racial justice

In 1927, First Christian merged with the Congregational church, forming United Church.  Some from the Society of Friends (Quakers) and Unitarian traditions did not have a critical mass to create their own congregations, so they also joined. United Church formally recognized these members in a special relationship with their denominations.

From these days stem our lasting friendships with Raleigh Friends Meeting and the Unitarian Universalist Fellowship of Raleigh. Signs of our Friends forebearers are in our inclination toward silence in small group worship and a willingness to go along with a proposal unless someone has a strong objection.  From the Friends, we inherited a commitment to working for peace. This found its voice when we became a Just Peace Congregation of the UCC (1981/1993), receiving their Just Peace Award.  From the Unitarians, we inherited an openness to the wisdom and tradition of other faiths and of strains of Christianity more in tune with mystery. 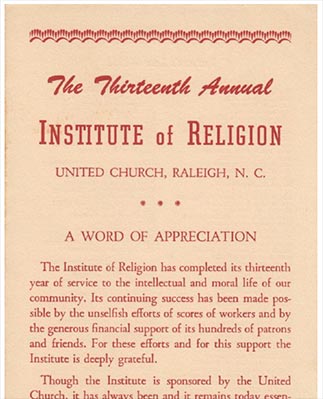 Over the next 50 years, United Church became a center of education in the community and a voice for racial justice, with the two often combined. We became a “college church,” attracting faculty and students from State College (now NCSU).  Many were drawn by the Open Forum (1928 – 2000s), which featured experts speaking on contemporary issues.  In 1936 the Business Board of the church voted that “colored people” would be welcomed to worship with us. From 1939-1964, United Church organized the Institute of Religion, an integrated dinner and lecture series with speakers of national status, such as Eleanor Roosevelt, Ralph Bunche, Hubert Humphrey, Martin Luther King, Jr., and Reinhold Niebuhr.  In our small capital city, the Institute was a major annual event, providing opportunities for people black and white to eat and talk together.  It was also a lightning rod for pro-segregationists.

Having set its course, the congregation built relationships among the congregants of First Congregational Church and United Church. The churches were led by the Rev. Howard Cunningham and Rev. Gaylord B. Noyce, who became good friends. Members’ friendships grew through pulpit exchanges, joint worship services, and visits at each other’s worship.  In 1954, the two churches held the first of several interracial Vacation Bible Schools at Umstead and Reedy Creek parks. The VBS marked the integration of the North Carolina park system.  In 1964 these two churches joined three others (two black and one white) to build RICH Park Housing, a HUD-housing project with no racial barriers, for low income families. The same five churches started the Method Day Care Center, serving the children of that neighborhood. CUCC remains engaged with both of these nonprofits.

A move, a new name, and a female pastor

Meanwhile, in 1954 a new Evangelical and Reformed (E&R) congregation started in Raleigh. In 1956, they built a new sanctuary and education wing at the corner of Wade Avenue and Dixie Trail.  At the national level the E&R denomination had merged with the Congregational Christian denomination to form the United Church of Christ, and the two churches in Raleigh began to wonder if they should build a relationship. That idea led to consideration of a mutually advantageous merger of the two congregations.  The E&R congregation had a heavy mortgage debt and small membership.  United Church’s massive stone building was in need of expensive repairs, and paying for those would have diverted resources from more interesting ministry. In 1969  the two merged, creating Community United Church of Christ.  Unfortunately, the two congregations had not taken time to build a relationship first.  United Church members were committed to integration, and Evangelical and Reformed members were more inclined to stick with the status quo.  They soon found themselves in uncomfortable conversations.  Only a few former E&R members decided to stay in the congregation. 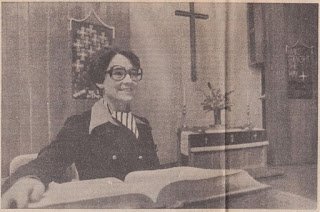 The new Community United Church of Christ steadily regained its balance.  In 1978 we called our first woman pastor (Rev. Ann Calvin Rogers-Witte) who brought with her a young family.  Cally led us to draw closer to the denomination and enriched our spiritual and relational sides.  Perhaps of longest-lasting impact, with Cally’s leadership we renewed our commitment to being a church that includes all generations.  As our welcome of children, youth and families deepened, we realized that our dreams were bigger than our volunteer leadership could realize.  In the 2000’s we added the warmth and experience of former preschool teacher Anne Bailey Zschau, our part-time Director of Children’s Education, and then the joyful wisdom and artistic creativity of Śānti Matthews, who joined us to coordinate youth programs.

In the 1980s and 90s much of our justice work reached back to our Friends and Unitarian roots.  We led Raleigh’s nuclear freeze effort and a tax revolt to pay back a local tax cut. Our peace focus led us to creating new international relationships.  We hosted guests on the Overground Railroad from Central America to safety in Canada.  Youth and adults participated in exchange visits with a sister church in Puerto Rico.  Our members represented us on visits to the Soviet Union, and we began a relationship with Rev. Urusula Schmitt-Pridik, a pastor in the UCC’s partner denomination in Germany. We welcomed first one and then many new friends from the Democratic Republic of Congo, some of whom worshipped with us while also founding a branch of their home church which still meets in our building.

Having initiated the Raleigh Religious Network for Gay and Lesbian Equality, we realized we had never formally stated our welcome to gay and lesbian people. Our 1989 Open and Affirming Congregation resolution put into print what was already true:  that no matter who you love, you are welcome here.  In 2011 we renewed and expanded our ONA commitment with a formal welcome to people who are LGBTQ.

During the 1980s over half of our members participated in CLAY, a guided exploration in small groups to explore the ministry of each person.  Whether that ministry was one’s career or an avocation or the thing one seems to do in every group, CLAY participants began to see themselves as having a call.  Each has a set of gifts provided by God and polished by experience and relationships.  Rather than thinking of the pastor as THE minister, CUCC members embraced one another as ministers with particular and essential gifts to offer our life and work together.  We are grateful for the gifts and training of our staff, but we don’t wait for them to make things happen for us.  Leadership is dispersed, a little chaotic, and abundant for such a small congregation.

While music has always nourished our worship, we’ve seen a recent blossoming of styles of music and a variety of performers. Music Coordinator  Doug Barrick joined us in 1981, bringing us soloists from the community and sharing his passion for the stories behind our hymns.  At the end of the ‘90s Anne Moorman-Smith  became our choir director, leading our traditional choir.  Most recently she and her husband Monty Smith have engaged our children in a children’s choir. Together they have built on Monty’s talents in bluegrass to entice instrumentalists in our congregation to form The CUCC Band which plays bluegrass and more in our 10:30 worship service.  The newest addition to our music leadership is Chelsea Huber who joined us as Youth Choir Director.  We round out our musical offerings with members who sing spirituals and folk music, and play in the occasional pick up jazz ensemble.

By 2007 our concerns about the changing climate became the Justice in a Changing Climate Initiative.  The solutions we seek pay special attention to those with the fewest resources for adapting to changes or for engaging in new opportunities.

In 2012 CUCC established the Carolyn and Cy King Peace and Justice Award to honor the Kings.  Carolyn and Cy King were beloved CUCC members and persistent witnesses to peace and justice in the community.  The award is given to people who embody the Kings’ spirits of service and grace, and demonstrate commitments to addressing issues of justice and peace in our community and world.

Community Church Low Income Housing Corporation (CCLIHC) was born in 2014.  Two properties – a small home and a 6-unit apartment complex – adjacent to CUCC’s corner lot had come on the market.  Although we were intrigued at first by the option to expand at a future date, we quickly realized that if we didn’t buy the homes, a developer would be likely to replace them with high end rentals or condos.  By buying the houses and renting them at affordable rates, CCLIHC joined RICH Park Housing in our affordable housing ministry.

We are now under the leadership of Rev. Lacey Brown who arrived in May 2020.  In April 2022 we celebrated the ordination of Śānti Matthews, who now serves our associate pastor.  We are living into a new vision for being church – extending God’s extravagant welcome for gathered community to those beyond our walls.  While the pandemic has taught us how much we need to be face to face, we also like the flexibility (and carbon savings) of meeting online.  With the help of Communications Manager Jeff Cole, we gather on Sundays for “hybrid” worship.  Study groups, justice work, and time for friendship can meet on Zoom, on campus or both simultaneously.  We see possibilities in this model to include people who are unable to come to our campus, or who are wary of walking into a “church building.”

Whatever the future holds, we’ll figure it out together with God’s grace.  How could we do anything less with this “cloud of witnesses” showing us the way?